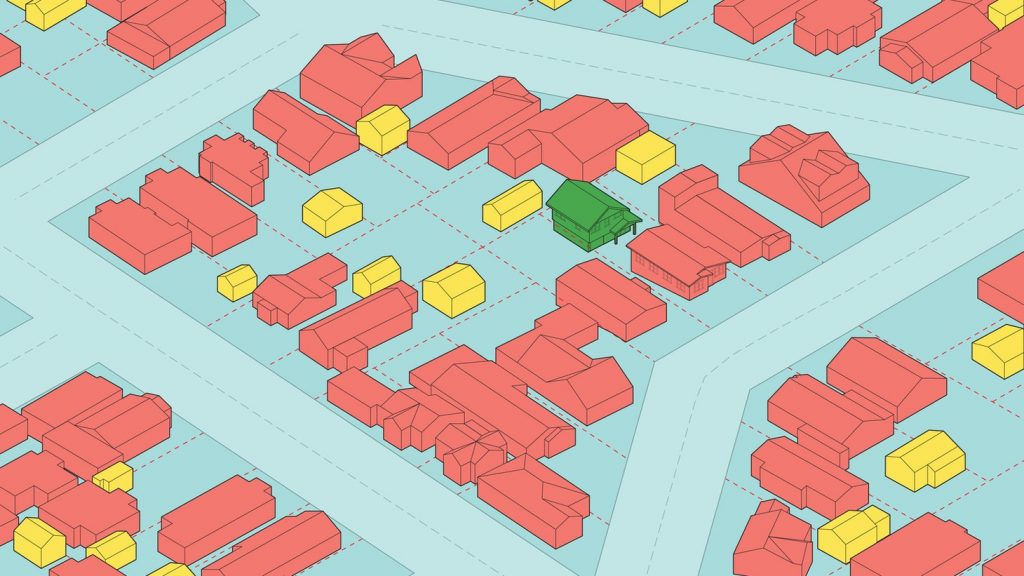 Much of Coastal California, stretching from San Diego in the south to Santa Rosa in the north, is in the grip of an affordable housing crisis. While there are numerous causes, a primary one is the high cost of land, since new construction is constrained by mountains to the east and the ocean to the west.  Infill development and high-rise construction is expensive, time-consuming and often long-delayed due to building regulations and local opposition.  Proposition 13, passed in 1979, has made it difficult and expensive for long-time homeowners to move or downsize, thereby limiting the supply of housing on one hand, and motivating conversion of multifamily housing into condominiums on the other.  Amidst all of this, the professionals on whom community well-being depends–teachers, police, firefighters, construction and service workers, janitors–cannot afford to live in the places they work.

Housing prices in Santa Cruz are among the highest in the United States, with median rents for a one-bedroom apartment exceeding $2,000 This sum is beyond the reach of many tenants, including professionals on whom community well-being depends— teachers, police, firefighters, construction and service employees, janitors–but who cannot afford to live in the city where they work and serve. The high cost of housing has also “trapped” homeowners who cannot afford to downsize because of the property tax burden that would come with a new house, and it contributes to people sleeping in their cars because there are not enough rentals available at an affordable price.  What are we to do?

There are a number of ways to increase the supply of rental housing in Santa Cruz which could bring down median rents in the city, once enough units are built.  One option is to build upwards. The per dwelling costs of “high-rise” construction, unless publicly-subsidized, usually put such units out of the affordability category.  For example, a proposal to build a 175-unit apartment complex in downtown Santa Cruz involves a set-aside of 5 units for tenants with 80% of AMI ($78,400 & $54,880) and 15 units for those with 50% of AMI ($49,000 & $34,300).[1]  This means that allowable rents would be $1,960 and $1,372 for the first group and $1,225 and $888 for the second group.  These are below the city’s median rents, but just 20 units is not a viable solution to the housing crisis.

A second alternative is infill development, on privately or publicly-owned lots and spaces.  This means “filling in” open spaces in existing neighborhoods, “building up” rather than “out,” and turning single family structures into multi-unit ones.  Infill housing utilizes existing infrastructure and reduces urban sprawl, while revitalizing older neighborhoods.  Another popular approach to infill is “transit oriented development” which concentrates new (usually multi-family) housing around transit stations and centers.  However, given the high cost of land in most urban areas, infill tends toward gentrification and rising real estate and rental costs, forcing current residents to move elsewhere..

A third alternative is the backyard accessory dwelling unit (ADUs).  An ADU is a self-contained housing unit addition to a primary residence,  ranging in size from 200 to 1,200 square feet. ADUs come in a number of flavors–free-standing units, additions to existing houses and “over- the-garage” units.  What does an ADU cost?  Most construction companies quote a figure of $150,000 to $300,000 for an architect designed, “stick-built,” stand-alone unit ($250-500 per square foot), depending on various bells and whistles.   ADUs come in a number of forms: free-standing, additions to existing houses, “over-the-garage” units.  Whatever the form, there are several advantages to “infill” ADUs over the alternatives: :

There is growing interest in ADUs as an approach to increasing the rental housing supply in urban areas; many cities have instituted programs of various sorts to encourage homeowners to build and rent such units.

You can find out more about  Accessory Dwelling Units in this policy proposal and on our ADU Resources page  .